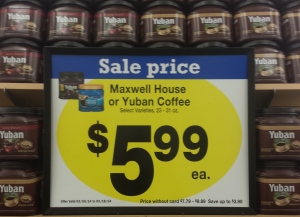 Beware the endcap in the supermarket—no unit pricing.

Can we expect resistance to metric adoption from the food/supermarket lobbies?

Based on what I’ve come across so far, the answer would be “Yes.” Early on I had someone “in the know” tell me that grocery stores had been against metric adoption during our last push in the 1970s because they would get caught between metric units and consumers, as in “I can’t buy a kilogram of hamburger. What the heck is a kilogram?” But I think it goes deeper than that.

Food manufacturers and supermarkets will continue to play games with us as along as it benefits them. In the 1967 copyrighted, The Thumb on the Scale or the Supermarket Shell Game by A. Q. Mowbray, (In chapter 3, “The Package as Salesman”), he points out that after World War II, the dynamic between the food retailer and consumers shifted as the public stopped going to local “markets” and started shopping in “supermarkets.” Without the human interface and a large array of products within a category (cereal again comes to mind), and with the generally high quality of most of the offerings…

Packaging is no longer merely a method of holding or containing the product for storing and shipping. It is now a major element in the advertising and promotional campaign. It is a full-fledged salesman. p.13

The author then includes a quote from a sales promotion manager:

Some food processors are actually in the packaging business rather than the food business. p.13

I started poking around in food retailing publications and came across this quote:

In the wake of multiple lawsuits around the use of the term “natural” (against Trader Joe’s, PepsiCo, Goya Foods and others), it could be time for food companies to reconsider using it on labels and focus instead on new product design and more creative language.

Thus, food manufacturers are still under fire for misleading claims, promises and labeling. The article, “The Natural Debate: Your Consumer Is Your Regulator” was dated March 4, 2014 and was linked to from Supermarketnews.com.

Obviously, we’re still the target of manipulators as manufacturers try to get us to buy their products and stores try to sell us items with the highest profit margins.

I remember a time when I had trouble figuring out which food was the least expensive since the “unit price” amount didn’t always use the same base (as in “cost per ounce” for coffee versus “cost per pound”). A recent trip to my grocery store (Smith’s) revealed no such problem with the labels on the shelf. All were clearly marked and easy to compare. However, a little more digging revealed that application of unit pricing regulations is not uniform within our country. While my state does not necessarily adhere to unit pricing, apparently my supermarket chain does.

However, I was able to find examples of mixed unit pricing to show you on Amazon.com.

Apples and oranges or is that ounces and pounds?

Note the two weights on flour sold in its site. In one the “cost per” is pound and other one lists ounce. Frankly, I can’t do that math in my head to figure out which is the best deal without a calculator.

How the metric system could help in the supermarket

If we were using the metric system for these things comparisons would become easier since larger and smaller amounts relate to each other by multiples of 10, 100, or 0.1, 0.001, so you’d just move a decimal point in one direction or the other and not have to deal with the crazy 16 ounces in a pound we use now.

I’m not saying we couldn’t get deceived when we’re buying food or other items once we’ve converted to the metric system but it should make our lives (and those of our children…) a little easier. Isn’t that worth a little hassle in the short term?

Note: My title references the old proverb: “The more things change, the more they stay the same.” Originally from French (Plus ça change, plus c’est la même chose), it means that things don’t really change all that much.

3 thoughts on “The Metric System in the Supermarket — Part 2: The More Things Change…”