In my last post I wrote about the class I’m taking to help learn how to raise capital for businesses. As part of the homework, some of us are trying to raise funds for our various projects. In a few cases, the full amount of money people are looking for is less than $2,000. In other cases, such as mine, it’s kind of a crash course in crowdfunding.

While my current estimated budget for the entire documentary is more than $200,000, for the class project I’m just asking for funding to help with my travel to Washington D.C. where the bulk of my interviews will take place. I’ve set up a separate bank account where the money will go (providing I at least meet my goal; it’s an all or nothing situation) once overhead and taxes are paid.

What my classmates are working on

While I’m putting my project first on the list, if my work doesn’t interest you, please feel free to take a look at the work of my fellow students. (It’s really a nice group of people, I must say. They could all use your support though the local ones would probably be of less interest.)

Mine (includes a two-minute background video on what I’m trying to do).

Short film for heathcare workers (and others) to support adopting families

In New Mexico and Los Alamos

Help learn about DNA and biodiversity in New Mexico

If you look around, you’ll notice that the preamp kit has already met its goal. (Go Jason!)

If you could pledge a few dollars or just help spread the word of what we’re trying to do, that would be greatly appreciated!

More soon, I promise. Lots of interesting stuff in the near future.

Thanks for your assistance.

One of the supporters of my documentary project is Nicholas Seet and as a result of my contact with him, I started a class a month ago called “Financing the Entrepreneurial Enterprise.”

During the first class we did briefs on the various projects we wanted to launch. The reaction to this documentary by the class members was very positive. In fact, one of the other students told me she’d worked in international trade and conversions had caused problems because sometimes people got them wrong and the company received less money than they should have. 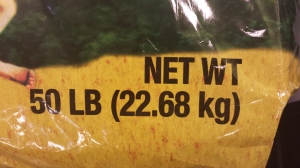 Dual labeling can cause mistakes for employees at the register

In another case, a local business owner told how dual labeling was causing her problems. She owns a pet accessories store and sometimes employees in a hurry charge the kilogram price rather than the pound price. Thus, they’re charging less than half of what they should and she loses money every time that happens.

One of the big pushes of the class is to raise a small amount of money ($2,000 or less) to help finance our projects (or small parts of them). For the class, we’re working through something called Main Street Crowd that focuses on community-based fundraising efforts. Within this context, it’s to give us successful crowdfunding experience to help prepare some of us to finance larger amounts through sites such as Kickstarter and Indiegogo.

My project ask will be $1,500 and will be earmarked for my travel and time in Washington D.C. where I plan to have a number of on-camera interviews. Some of the folks I hope to meet with include the National Institute of Standards and Technology, the Smithsonian Institution, Center for Science in the Public Interest and others since they’re all based in the D.C. area.

I’ve already drafted and gotten feedback on my campaign content for the project’s Main Street Crowd page and yesterday we were supposed to have draft scripts ready. In addition to my script, I showed a Prezi presentation while I read the script as kind of a storyboard. Since Prezi allows you to animate your content (kind of like PowerPoint on steroids) it had a pretty good flow.

I received a couple of comments for improvement but the instructor said I could basically record that presentation, add the narration, begin with some live video of myself and I’d have a pretty compelling video for the campaign. What I was planning for was much more time consuming so that came as a welcome relief. I still need to clean it up since it was intended to just give the class an idea of what the images would look like. Once it’s ready, it will be part of my Main Street Crowd page and you can take a look. I know I have a larger number of international readers of this blog and, yes, you can contribute if you’d like.

– Because of my presentation at the MidSchool Math Conference earlier this year (the conference is already slated for next year) I was approached to take part in a career fair later this month in Taos, about 80 km from where I live. I need to pull together a 45-minute presentation for middle school students that I’ll repeat five times during the sessions. Will probably lose my voice by the end of the day but the more I can get the word out on this project, the better. Not sure if I’ll present at the conference next year. I have an application in.

– Last month was my busiest month of all time. Thanks for helping this happen! 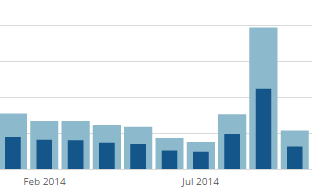 The highest bar represents almost 9,000 pageviews for September. The dark blue bar is for unique pageviews. Most visitors click on two of my pages.